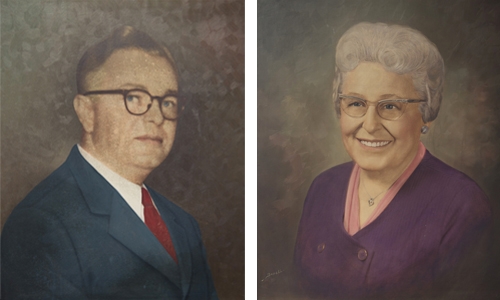 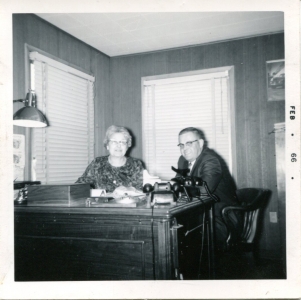 The Rocket Companies had their humble beginnings in the spring of 1945. It all began with the dream of Perry B. Hanson, who left the employ of Lambert Transfer of Minneapolis, bought a used auto car tractor plus a Fruehauf trailer, and began hauling granite from Cold Spring, MN to customers in Minneapolis. On Saturdays, his son Bernie and daughter Bonnie would take turns riding with their dad.

His first new tractor was a 1946 K.B. 11 International with a Tulsa Winch, of which he was very proud! Perry grew the business rapidly and was soon engaged in hauling steel culverts, tanks, bar joists and building materials throughout Minnesota. His first cranes were H-3 Bucyrus Erie models with clam shell attachments for digging and setting underground storage tanks.

Upon Perry's untimely death in November of 1954 at the age of 44, he had expanded the business, running nearly forty trucks and tractors plus an equal number of flatbed, step deck and low boy trailers. After Perry's death, his wife Cele and their children took over operations. Cele was 48 years old, Bonnie was 20 years old and Bernie was 18 years old.

Soon Rocket had acquired eight state operating authorities and began hauling freight throughout North Dakota, South Dakota, Minnesota, Kansas, Nebraska, Illinois, Iowa, and Wisconsin. In the late seventies the Interstate Authority was sold, and by late eighties most of the trucks and accounts were sold.

Rocket Transfer Company was sold in 1983.Bernie's two sons, Patrick and Paul, were put in charge of Rocket Crane Service and officially took over the business in the Spring of 2013. We moved from our North Minneapolis location to New Hope, MN on November 30, 2009, so the old building could be torn down to make room for the new Lowry Avenue Bridge.

We have been growing at a steady pace since the late 1990’s and we have increased revenues ever since! Rocket Crane Service is now operating at the largest fleet we have ever had, with boom trucks ranging from 28 ton to 38 ton and hydraulic cranes ranging in size from 35 ton to 275 ton. Rocket Crane Service also has a full fleet of truck and trailer combinations.